Well, sort of. We had our last long training run with the group today, but most of the group wasn’t there. It was cold and rainy and most folks did their own thing. I, however, needed this run. It’s been weeks since I had a good trail run and while I was “meh” about the rain initially, I looked forward to the cleansing I was going to get from Mother Nature. We still have a few runs scheduled through to the HAT RUN 50K race day this coming weekend, but I’ll be going out on my own as I concentrate on the North Face 50-Miler coming up next month. 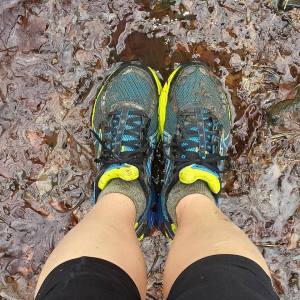 This is my second year training hard in the winter and frankly, I just don’t care for it. The weather over the past few years have been shit. Too cold, too snowy, too icy. It forces me on the road or <gasp> on the treadmill and turns me into Grumpy Cat. We’ve had some fabulous runs as a group when we were able to get together, but not as much as I would like.

Despite the rain, I went out with the group this morning for their hour and a half run for 6 miles, then went home, ate a huge bowl of corned beef and cabbage (I don’t recommend doing this), changed into dry clothes, and grabbed my dog for another 7.14 miles, for a total of 13.14 wet, muddy miles. It is, after all, Pi Day. 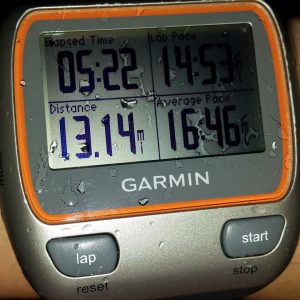 Someone told me long ago There’s a calm before the storm,
I know; It’s been comin’ for some time.

This training season has also been a little bit of a whirlwind for me on a personal level. And while I needed to turn to my running to find my peace, the weather just gave me the middle finger. As you can guess, things have been a little rough for me but I feel positive about the decisions that have been made. I will explain more in my next post, which I wrote a while ago, but wasn’t ready to click on the publish button until now.

When it’s over, so they say, It’ll rain a sunny day,
I know; Shinin’ down like water.

The solo run with Zoey was exactly what I needed today. We ran through all the mud puddles, crossed all the streams shin deep, and I almost lost my shoe in the muck twice. Those who have been following me know that I’m “ew” about the mud. But today I had to put my big girl panties on and just let go of the “ew” and have fun with it. So I did and it was fantastic! 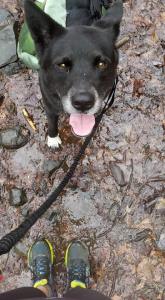 Yesterday, and days before, Sun is cold and rain is hard,
I know; Been that way for all my time.

I want to know, Have you ever seen the rain?
Comin’ down on a sunny day?

There’s something about running into a storm and coming out of it feeling like a new person. I get this feeling most times when I run in the rain. Yeah, wet feet sucks, but man you really can’t beat that feeling of feeling cleansed when you let the rain wash over you. Every day I feel like a newer version of me and today’s run in the rain just cleansed away little bit of the old Sandy that had tucked away for a long time. It felt great. It feels good! The sun will shine tomorrow. I know it.

9 thoughts on “Winter Training is Over! – Let the Rain Wash Over Me”