It’s been three days since we started our journey on the Camino and I must say, this is probably one of the most breathtaking, and quite interesting, journeys I have ever made….and we still have 10 more days on the Camino left in store. We had the choice of three routes, the coastal, central, or the scenic route through the mountains. Originally, we planned on going the scenic route, but were quickly convinced that the coastal route from Portual to Spain was the way to go. Reluctantly, we decide to go with the masses and take the Coastal route. We started in the town of Viana do Castelo and ended up in Caminha. By the end of day one, we were regretting that decision.  We were only supposed walk 17 miles and ended up at 21 in pouring down rain with very brief moments of sun.  This section of the Camino was not well marked and we kept getting lost. We had several people who recognized us as pilgrims stop us to let us know that we were on the wrong road, but when we followed their directions, we ended up more lost than before. Everything was lost in translation. 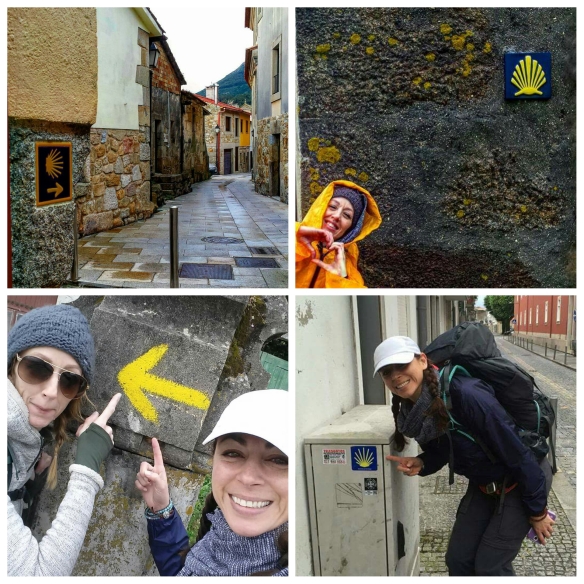 By the end of day one, we were tired – exhausted beyond belief. We found a hostel (called an albergue) used by the pilgrims and decided to camp out there for the night and when we walked I we knew right away – big mistake. BIG MISTAKE.

The hostel cost us 5 Eruos each and offered a “bed” to sleep in and “facilities” to wash up in. I use those terms loosely. There was I time when I thought I could rough it anywhere in any situation. In that instant, I realized that’s was bullshit. I’m not a rough it kind of girl. There is such a thing as crossing the lines, and this was it. I would have preferred to have camped out in a make shift tent hidden somewhere in a corner of the woods.

We had approximately 15-20 guests in our hostel. It was apparent to me that they were more used to these conditions than Michele and I were. I needed to sleep and we were too tired to look for another place, so we hunkered down. I was so grateful that Michele told me to purchase a light sleeping bag. I climbed onto the top bunk, crawled inside my sleeping bag and closed my eyes. Then it began.

First the gentleman in the bottom bunk next to Michele, then some dude further across the room. As Michele put it, “it was the snoring band jamboree that started out as a trio, then became a quartet, then became an entire orchestrated event.” And apparently, she said, I chimed in as well. I told her it was my way of creating white noise to cancel out the insane chaos that surrounded us.

When morning came, I asked of of the other patrons if this was typical of hostels. She immediately said in disgust, absolutely not. She said that this was the worst hostel she has ever stayed in and to not be discouraged about staying in hostels in the future. We’ll see.

Day two proved to be much better and we were now happy with taking the coastal route. We took the ferry from Portual to Spain and picked up the Camino trail from there.

It took us on a trial through the woods and I immediately felt at home. I was in my element an I wanted to drop my backpack on the ground and start running. It was so beautiful. 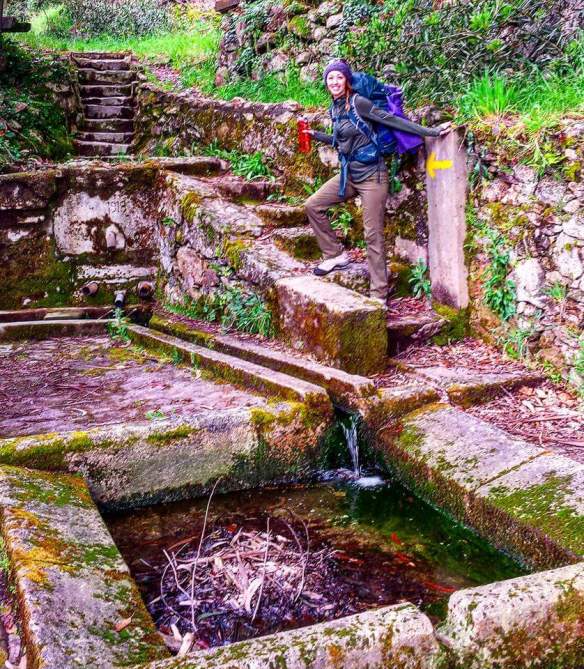 We came back out to the highway and then along the Spanish coast. Again, it was beautiful. We stopped at a restaurant along the way and enjoyed the view while the storm passed. The weather has been very off an on for us. We are constantly taking of and putting our our ponchos that it’s actually to the point of ridiculous. It’s as if Mother Nature is having fun watching us do this. As soon as we put it on, the rain stops. When we take it off, the rain starts again and doesn’t stop until we put it back on. Funny, but not funny. 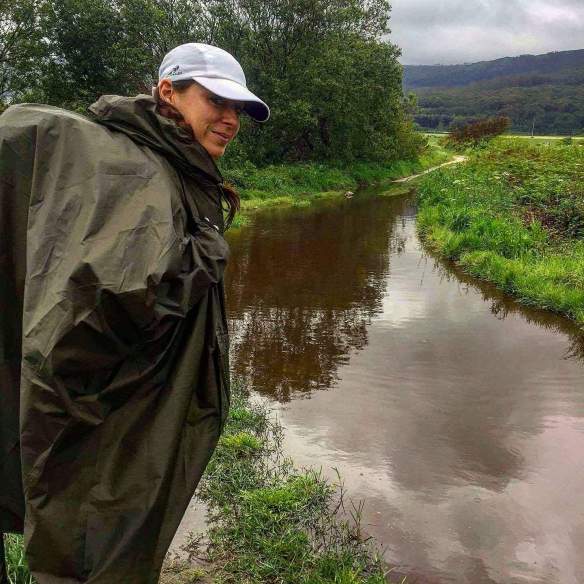 Anyway, day two has been the most beautiful so far…but it’s only day two. We really took our time to explore the coast and take it all in…every scent, every sight, every sound. It was all so breathtaking.

Here we are at day three. We have nestled in this little town in Oia, Spain and decided to spend the day here and rest. Michele’s IT band is acting up and we do have three days of rest built in just for this. It’s too early in the game to push her when she isn’t ready. We have a lot of miles left to cover and many days ahead to get it all done. Besides, what’s the hurry? Back at home, I live a very fast paced crazy busy life and the only downtime I have is when I’m out running on the trails. This is my time to take a step back and slow down my pace. And it feels so, so good to do so.

The Camino de Santiago translates to “The Way of St. James.” It is a the pilgrimage to the Catherdral of Santiago de Compostela and has existed for over 1,000 years. “Throughout the medieval period it was one of the three most important Christian pilgrimages undertaken. Indeed, it was only these pilgrimages – to Jerusalem, to Rome, and to Stantiago de Compostela – which could result in a plenary indulgence, which frees a person from the penance due for sins.” (www.americanilgrims.org/history) Legend has it that after St.  James’s body, along with his two deciples, were found after being lost, they were taken to a small village named Campus de Ia Stella and buried. After news of this got out, pilgrims began to arrive. And as pilgrims bean to arrive, miracles began to happen.

People walk the Camino for many different reasons. Some are searching for answers, some are looking for miracles. There are also those who just want to experience something pretty damn awesome.  In fact, when you reach the Cathedral of Santiago de Compostela, you will be asked why you took this journey? Was it religious, spiritual, or recreational? For me, it’s spiritual. It is me fully closing a door to my past and fully embracing my future.  It is a time where I hope to find a way to let go of past regrets and realize that the miracle in my life is the growth and change into the person that I have become. The miracle of self-acceptance is something that most people don’t recognize, but it truly is a miracle. I hope that you too experience this miracle one day, if not already. It’s a beautiful thing. 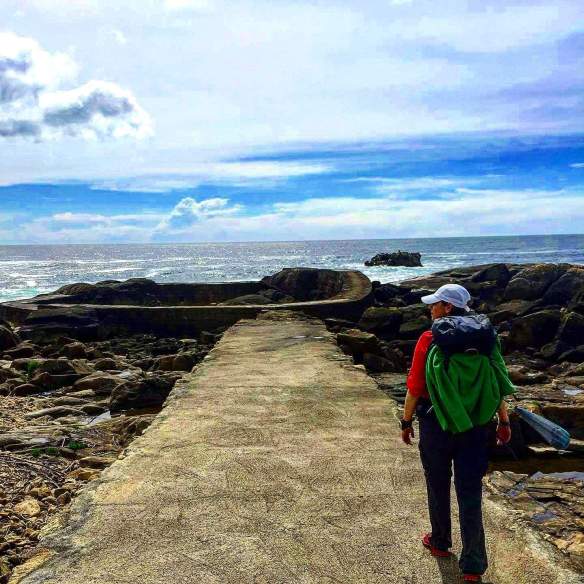