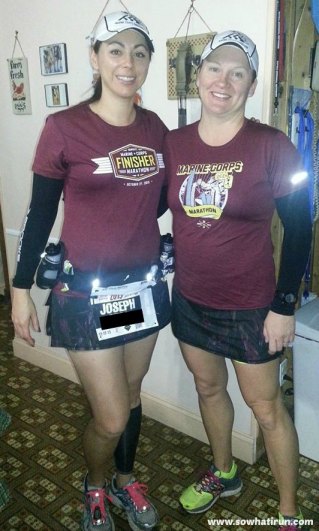 Kendra’s parents drove us to the city and dropped us off just a couple of blocks from the start. We checked our bags in, made our way to the spot-a-pots and did our business while we waited for the race to start. As we wandered around we found an area where Lululemon was doing a pre-race yoga warm-up, so we decided to join it. Honestly, it was the most stretching and warming up I did for any race. I wish they had this at all of the races. 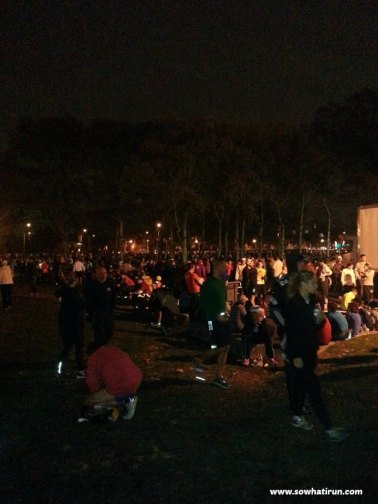 Before we made our way to the corral, we took the obligatory picture with Rocky. 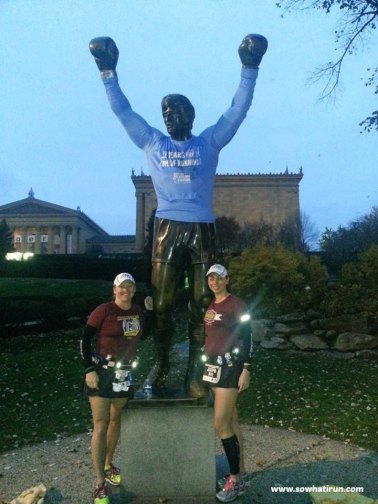 Kendra was supposed to be in the Blue corral and me, as Joseph, was in the Gray corral. We started out in the Blue, which was all the way in the back. We decided that we wanted to be further up and made our way to the Orange corral. Even with advancing to the next corral, we didn’t cross the Start Line until 30 minutes after the start. They had announced that the leader in the half marathon group would be approaching us in 42 minutes. WHAT?? We haven’t even started and the lead in the half was close to half way done? Geez! 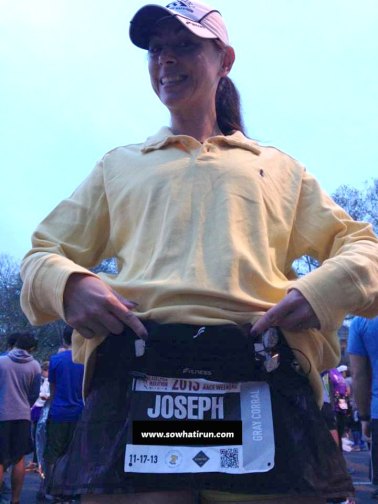 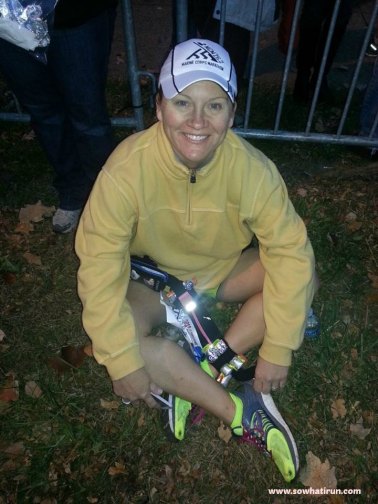 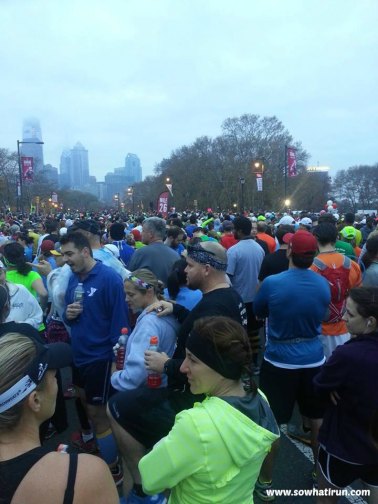 and took our traditional pre-start selfies. 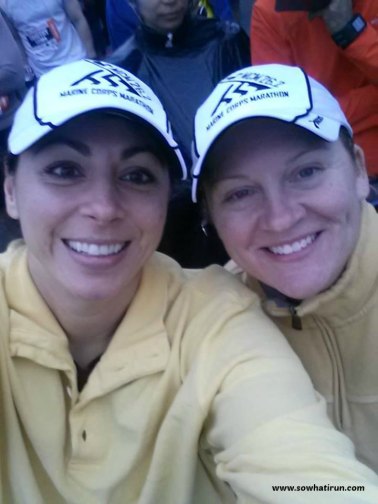 Finally, we were off! A few miles in we had to use the bathroom. The lines for the port-a-potties were RIDICULOUS! Seriously, there were lines 10 people deep waiting. So, at Mile 3.75, we cut through the race barrier, sprinted across a 4-lane highway to a Dunkin Donuts. One of the best decisions we made. Only had to wait for one person, had a clean bathroom, toilet paper, and a real sink to wash our hands. Total score!

The weather was race perfect! I was having the time of my life! Supporters in Manayunk were giving out beer, so we decided, why the hell not…drink up! We weren’t running for time and had no goal but to finish, so let’s have as much fun as we can, right? As we ran, Kendra pointed out all of the sites and what they were and spectators cheered us on. I even got a couple of “You don’t look like a Joseph.”

We were in the zone, until about Mile 10 when Kendra had to… (a-hem)… go #2. Again, all the lines for port-a-potties were miles long. While we weren’t worried about time, we didn’t want to wait in those lines and risk having our legs cool down. We continued on until we had to get creative. A few more miles in, I spotted an overgrown “cave-like” area across a field. She made the mad dash as I waited. Don’t worry, I didn’t have to wait long. She was quick like a bunny (I hope she doesn’t kill me after reading this). We were back on the road to finishing our second marathon in 21 days. Oh, and as we turned the corner at a turnaround, we found port-a-potties…with no line. You see, Kendra is a victim of some cruel phenomenon where the universe creates these lines which forces Kendra to get creative when she has to use the bathroom. Once she does her business, voila…no more lines. I’m a witness, it happens every freaking time.

Yes, I’m that friend that takes your picture after you do your business.

By Mile 17, we were hurtin’ puppies and stopped at a medic tent for ibuprofen. Both of us had old, dead running shoes. Felt like we strapped on concrete rocks to our feet and used them as shoes. We both knew we were running in dead shoes, but thought it would be better than running in brand new shoes that we didn’t break in. Next time, I’ll take the chance on a brand new pair of shoes. Miles 17 – 18 were really tough. We took our minds off of our pain by cheering other runners that were running by us in the opposite direction. 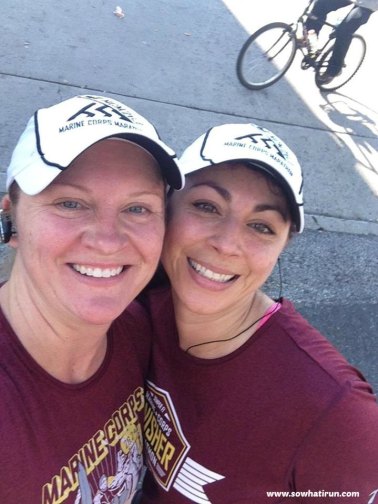 Kendra and I talked about when we were going to pick up the pace. At this point, I was spent. While we weren’t running fast, I couldn’t move my legs any faster. At Mile 25, we were greeted by Kendra’s sister, April, her daughter and her daughter’s friend (they also cheered us on over a bridge around mile 13). 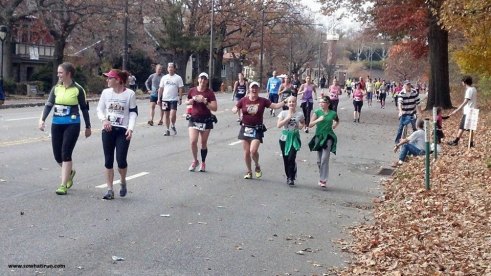 Our energy picked up again and it was time to go in for the kill. I ran as hard as I could and Kendra was kind enough to not push me any harder. We held our hands in the air together as ran through the finish line. DONE and DONE! 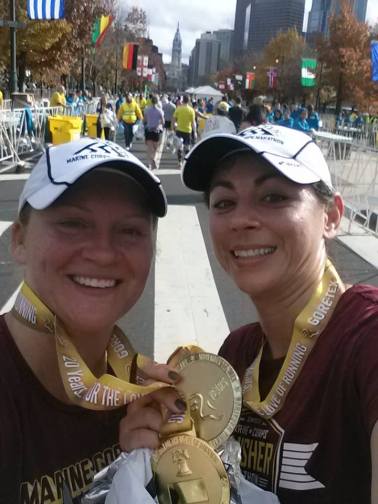 After a quick stretch, we headed off for a.Kitchen for our traditional post-marathon Bloody Mary’s and brunch. 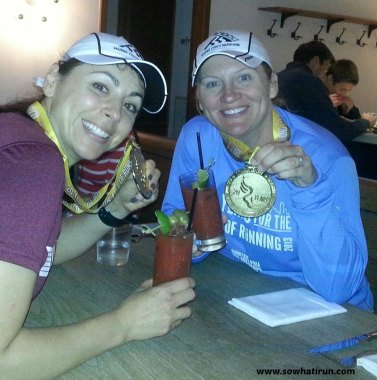 Now, I have to tell you…of the three marathons I’ve ran, I think this was the most fun for many reasons. There wasn’t the pressure or doubt of finishing “my first marathon,” there was no pressure of meeting a goal and setting a PR, there wasn’t the pressure of rushing to the start and making sure we didn’t miss a beat. Don’t get me wrong, Baltimore and MCM will always be special, but Philly will always be the one that was a hellava good time!

Later this week I want to tell you about my recovery. Having doing back to back marathons gave me the opportunity to compare the two recovery methods. There was a huge difference between MCM and Philly and I think I finally figured out what works best for me.

Thanks for tuning in!