Okay, Okay! I know I’m late in posting this weekend’s training, but ’tis this season to be caught up in the holiday bustle. Actually, I was just too worn out to move.

This weekend’s training started Friday with an intense upper body workout with an old friend of mine. I was unable to meet up with John, so I met up with my old personal trainer/friend who does competition body building. Three days later, I’m just now able to touch the top of my head…ow. It was good to see him and switch it up a little, and I’m grateful that he let me tag along so I wouldn’t miss out on training due to scheduling conflicts. But up until about an hour ago, I was cussing him out under my breath anytime I had to lift my arms more than six inches above my waist.

Saturday’s long run was a course run at the Susquehanna. The goal was 2 hrs. 45 minutes, however, we ended up just over 3 hours. It was as tough as I expected it to but, but it was doable. I had to remind myself, it’s only week 3 and yeah, my legs felt heavy, and yeah, I didn’t always make it up the hill, but in the end, I’ll be conditioned enough to do it.

Now, you remember when I said that this was going to knock the prissy little girl out of me? Eh…maybe not so much. While I love running outdoors and the trails can be breathtaking, I have to admit…I’m not a mudder. There was a lot of mud on the trails and I wasn’t happy about it. I remember when I did my first and only mud run, the Warrior Dash. I was SO excited about conquering the obstacles. I was training hard at the gym and I was feeling strong. I already had aspirations on doing a Spartan or Tough Mudder, until I jumped over my first obstacle and landed in the mud. From there, it got worse. I hated that dirt from other participants shoes were falling in my face as I climbed up obstacles behind them, I hated that I ended up with fists full of dirt in my crotch, and I was not particularly happy that my friend peed all the way down this long cold makeshift water slide right before I followed her. Nope…not happy at all. The only good thing that came from the race was hanging with the folks I went down with and this awesome picture!

Anyway. This week we were experimenting with nutrition. Coach Marie suggested that we use real food. I packed rice and eggs and totally forgot to pack it in my hydration vest. It’s a good thing that Reds shared her banana with me and I had an old leftover crusty Honey Waffle cookie in my vest, otherwise I would’ve bonked. I’m going to try the eggs and rice concoction this weekend and give you the details on that afterwards.

We were lucky enough to have perfect running conditions. It was nice to see 60+ degree weather in December and my lungs needed the break from the cold air. As always, Mother Nature was showing off her grace and style with some spectacular views.

One of my favorites is of this amazing tree. Breathtaking. 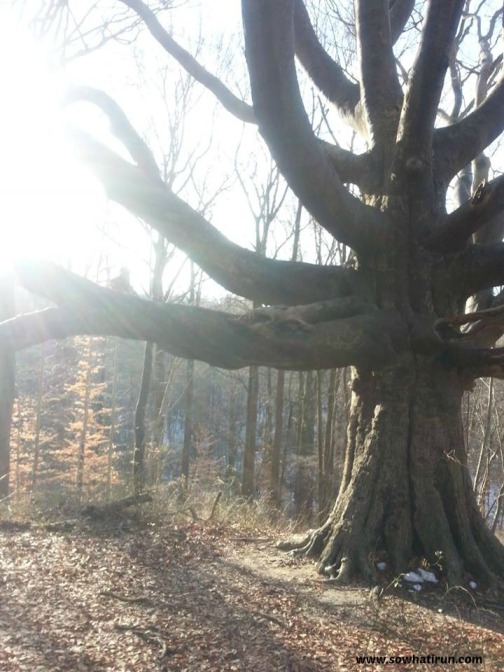 Do you remember back when Reds and I went to Susquehanna before training officially started to get a feel of what we were getting ourselves into? And do you remember that stream that we attempted to cross and decided that there was no way we were going to do it? Well guess what?! WE TOTALLY CROSSED IT! We had it all wrong. When we initially tried to get across a couple of weeks ago, we were trying to navigate across the slippery rocks and trying to find the best path to stay dry. Well, this week, we went all in!

Thanks to one of the folks in the training group (shout out to Dr. A), we went all in and crossed the stream. Apparently, the only way to do it is to go all in…soaking wet feet and all. It actually wasn’t as bad as I thought, but I’m glad that we did it at the end of the run instead of the beginning.

Sunday’s training run was supposed to be 5 miles, but I only made it 3.98 miles on the Ma & Pa trail. I ran the hilly side of the trail and when it ended, I stopped instead of continuing to the other side to finish up my last 1.02 miles. Frankly, my legs were dead weight and my arms were barely movable. I had to settle for what I got and it was better than nothing.

And I guess I’ve reached the point in training when some people have to decide if they’re all in or dropping out. While some of the training has it’s “ew” factor, it looks like I’m to going suck it up and go all in. It’s they only way.