Has it really been two weeks since I last blogged? I can’t believe how fast this is going. I’ve also realized that my “weeks” are mis-numbered, so I’m actually heading into week 4.  The past two weeks has had it’s ups and downs. I’m finding it hard to keep up with the training schedule and my asthma had decided that it doesn’t want to play nice.

The Good – I’ve had some very great runs over the last two weeks. The Saturday before I met with new running friends down at the Potomac Heritage Trails and ran 15 miles on the course. All in all, it was a successful run, but it didn’t look like it was going to be at the beginning.

The Bad – Training runs are not just for building your strength and endurance, but it’s also where you “test and tune” as my husband would call it in his hot rod world. I deviated away from my go to pre-long run dinner and breakfast and I didn’t respect my “happy pace.”

The new crew and I started out later in the day, which is not the norm for me. I had Chipotle the day before (my first time and I love it), which isn’t my normal spaghetti and meat sauce, and for brunch I had the Double T Special which consisted of two pancakes, two scrambled eggs, toast, double bacon, and breakfast potatoes. Normally, I eat 2 eggs, 1 egg white, and a light carb (banana, plain waffle, or plain English muffin). Do you see where I’m going here?

The new crew was FAST. We started out on the trail and I knew right away that there was no way I could keep this up for 15 miles. On the trails, I run about 11:45 – 12:15 depending on the hills. A quick look at my Garmin and I saw that we were in the 10’s. I was doing an okay job of keeping up, but my breathing got really heavy (yay asthma) and then it happened. I had that cramping sensation in my gut that told me that it was about to punish me for deviating from the norm. I thought that perhaps it was just gas and when I was about to…let it out…something told me…hold on tight. So I did. The pain got worse and then I started to feel nauseous. This was not going to be good. Up to this point, I have never had to poop in the woods. And if I had to go now, it wasn’t going to be one of those “clean getaways.” This felt like it had the potential of something “explosive.” I’m just barely a mile in!

Me and one of the girls fell a little behind on the hills. Erica came back and put us on the right path and that’s when I confessed. I wasn’t going to make the 15 miles. I frankly said, “I think I’m going to crap my pants” to perfect strangers. And I told them I felt like I was going to puke. Erica looked at me and nonchalantly said “I have toilet paper” and ” just stick your finger down your throat.” Runners. We’ve all been there and we understand the troubles that we go through during training. We’re a fantastic breed of athletes.

I knew in my mind that this was going to be a heeve-ho situation. While one end was heeving, the other end was going to ho. I told them to go ahead without me and that I was going to try and walk it off. If I couldn’t get my act together, I would text them and go home. We took a quick running selfie (cause there’s always time for a selfie) and parted ways. Once again, I’m on my own.

As they continued on their run, I stood there almost doubled over. I looked in my hydration vest to see if there was anything in there that was going to help. I remembered putting Immodium and Pepto in there last Summer and had hoped they were hidden away at the bottom. And there it was…crushed pink Pepto bidits in it’s wrinkled plastic wrap. I emptied the crumbs in my mouth and started to walk down the path of the trail.

Another mile in and I was feeling pretty good. I was really surprised, so I don’t think it was all about the food. I think it was the food compounded with running at a much faster pace than I was used to. I was really pushing and my guts didn’t like it. The rest of the run was great. I ended up passing the group one by one as they headed back after meeting their mileage and I continued on forward. The view was beautiful and at times I expected gnomes and faeries to wander out from the flowers to great me. I took this quick video and posted it on my Instagram account.

On my way back, I got lost. That’s the scary part of running trails by yourself especially if you’re not familiar with the area, but all was okay in the end.

This past week was a rough week.

The Almost Ugly – If you look at the chart below (click on it for a larger view), you’ll see my planned training schedule and my actual miles that I logged. Last week my asthma was in high gear. It has gotten to the point where I have a couple of doctors appointments lined up as it is no longer under control and it’s affecting my training. It’s annoying when you wake up in the morning breathless and know that you have to bag your training run and appointment at the gym.

The Bad – As you can see, I was in the yellow with meeting my mileage. Although I was only short by 6 miles for the week, I didn’t get my week day back to back short runs in. I know it’s fine to not follow a training schedule perfectly. Life happens. The problem is, I’m going away to Arizona this week on business and I’m not sure if I’m going to get all of mileage while I’m away. If that happens, then that’s two weeks of sub-par training. Then the following week is the Delaware Marathon, so I have to be careful to balance getting enough training and tapering all at the same time. I’m sure what I have is going to be fine, but the worry wort in me just has to worry.

The Good – Despite the crappy runs I had during the week, my Saturday and Sunday runs were great. I had a beautiful 20 mile run on Saturday at a 11:21 pace and on Sunday, I could have kept on going for more mileage, but I stopped at 10. My lungs were cooperating and so I needed to let it be. 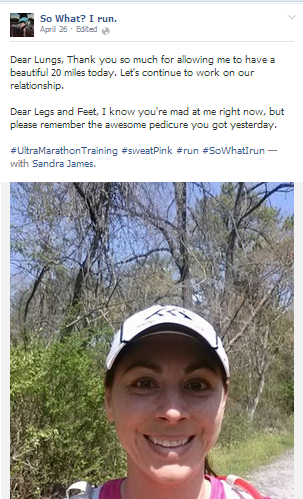 Like I said, these past couple of weeks has had it’s ups and downs, but what training doesn’t? It’s about learning how to deal with the situation and being prepared on race day. Training is where we are supposed to make mistakes and fine tune our minds and bodies to perform at it’s best when we need it to. I know that while I’m a little tired of my “go to” meals, what works works and I need to just stick with it. I’m learning to deal with the fact that I cannot ignore my asthma and my current course of meds aren’t working. I have to do something about it and I am. I’m also getting used to running on my own and am enjoying my solitude more and more. And while my shadow doesn’t make conversation, it isn’t bad company either. 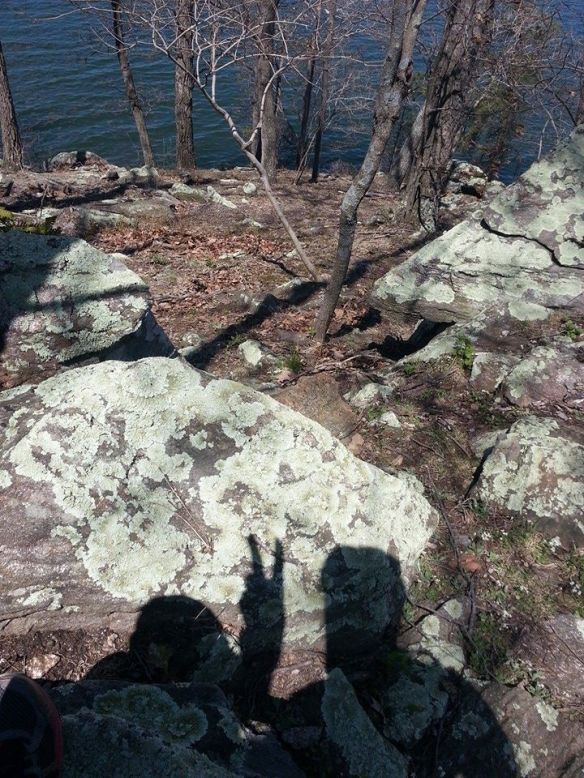