So. I think the universe is out to get me or something. With the recent illnesses and mishaps, I’m beginning to wonder if there’s a conspiracy against me. Why universe? WHY??? So today was the day that I was going to get back in the game. The plan was to get some hot yoga in in the morning, then head on over to Oregon Ridge for some hill training with the group. Well, yoga went well. The rest went to shit.

I had planned on meeting Megs earlier than the group so that I could get a couple of laps around the lot before shooting for the hills. I wanted to get my legs moving and see how my lungs were going to hold up. If all went well, I was running. If not, then I’d take it easy and walk the hills here and there and just keep the body moving. I had just gotten my samples of Tailwind Nutrition and I was looking forward to trying it out to see if it settled well with me. I plan on using it for this weekend’s long run, but wanted to make sure that I didn’t have any issues. I love trying new stuff!

As I got myself dressed in my running gear at the office, one of our IT vendors let me know that he was finish doing whatever techie thing he needed to do and I needed to sign him out of the office. I escorted him to the lobby signed him out, chatted a little and then as he got ready to walk out of the main door, horror overcame me. I had left my access badge on my desk. I was stuck in the lobby with no badge to get into the office, no keys – office or car, no cell phone, no laptop, nothing. There is no phone in the lobby, so even if I had a phone number memorized, I couldn’t call anyone. 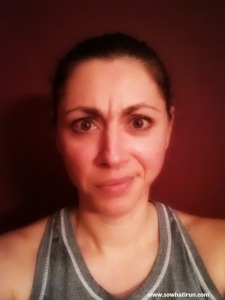 The techie was kind enough to stay so that I could try to get a hold of someone with a badge to let me back in using his phone. After Googling and calling the building management, security service, and cleaning service, I was stuck. Crap. Nothing to do now but talk about running. So I talked about running and he, who was a weight lifter, gave me every excuse why not to run and how he would like to run a marathon, but didn’t want to hurt his knees….wahh wahhhh…you know how this goes. Every rebuttal was met with an excuse. I was not amused, I was anxious to get out of there, and I was getting annoyed. While we bantered back and forth I realized that in my haste in getting dressed my booby pad in my sports bra had gotten squinched up in a ball. There I stood with one wrinkly squinched up booby pad trying to convince this guy he should run a marathon. Great. Oh and did I mention that my newly mixed Tailwind drink was just sitting in the office kitchen, not getting used? <sigh>

It wasn’t until about 6pm (the time I was supposed to me dear Megs) that I was able to reach a friend and fellow co-worker by using techie’s phone to log into Facebook to ask her to drive all way back out to let me back in. I left the office about 6:45 and decided to go home. There was a reason I wasn’t supposed to run today. I don’t know what it was, but I’m going to say, there was a reason. As I drove home and seethed over the fact that I had gone another day without running, another week not meeting the mileage requirements that I wanted to get, spent 2 hours with a squinched up booby pad talking trying to talk running sense into someone, I sucked down my already mixed up Tailwind drink and pouted. All I could think is “Seriously, Universe? Can I get a break already?”

8 thoughts on “Seriously, Universe? Can I get a break?”