WHERE DO I BEGIN?! There’s so much to tell you, but I’m completely exhausted, so I will just give you the highlights. I am SO glad we decided to head down to DC today for packet pick up instead of waiting until tomorrow. What started out to be about a half day event ended up taking the entire day, hence the late blog. My friend and I decided to take the train from Baltimore, then catch the Metro to the DC Armory instead of driving in the DC traffic. Catching Amtrak was easy enough, but getting on the Metro…well, that’s another story.

We meandered our way to the metro train and I got on. The doors closed, I turned around only to see my friend still on the platform looking at me. 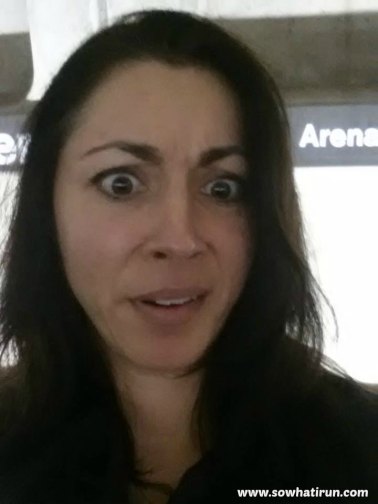 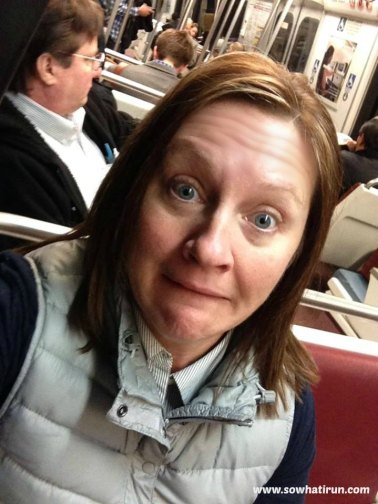 But, it’s okay! ‘Cause this happened!

I was mortified. I yelled No! No! NOOO! As the passengers looked at me. We just stared at each other through the doors of the metro car as the car rode off to the next stop. My friend said she felt like a lost toy all by herself as she got on the next car to meet me at the next stop. The whole incident felt like something ripped out of a Seinfeld episode. 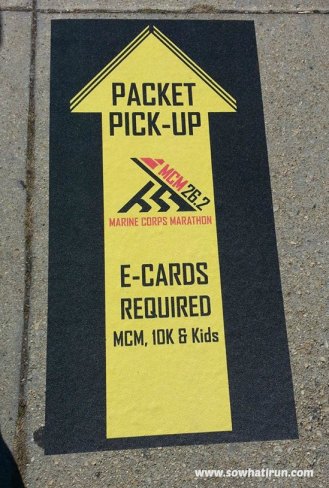 The line for the bib pick up was about 40 minutes long….and so was the line into the expo…and the line at the Brooks check out if you purchased MCM gear. LINES! LINES! LINES!

The military volunteers were absolutely wonderful! Very pleasant and friendly and helpful! I was really impressed with them.

Despite all of the lines, I would say everything was well organized. It just so happened we picked the busiest time to go. Lord only knows what’s it’s going to be like tomorrow.

This was taken from the check out line at the expo.

I picked up a great new shirt…

Took a picture with the mascot.

By the time we finished, it was 1:30. Our train back to Baltimore was scheduled to leave Union station at 2:04pm. Ummm…nope, not going to make it. We quickly got on the metro, well not so quickly – our metro passes somehow got demagnetized,  and proceeded to go in the WRONG direction, hopped off at the next stop, got on the correct metro back to Union station to catch the 3:30 to Baltimore.

So much more, but tonight is the most important night for sleep, so I’ll leave it here. If you’re heading down tomorrow, here are some quick tips…

I think that’s it. Good night!